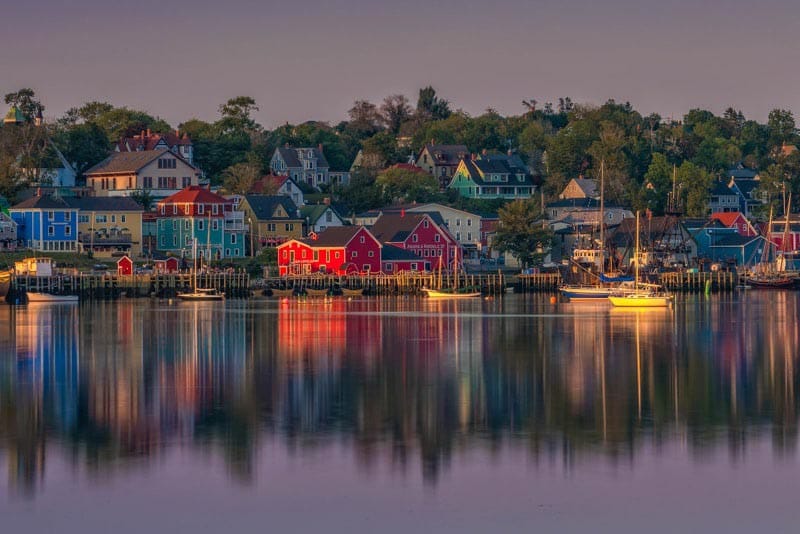 These pictures of Nova Scotia will inspire you to explore Canada’s beautiful east coast.

From Lunenberg to Peggy’s Cove, and The Cabot Trail to the Bay of Fundy, Nova Scotia is one of the most photogenic provinces in Canada.

We’ve rounded up our best Nova Scotia pictures taking the southern route from Halifax to Yarmouth and then continuing on to the Bay of Fundy and the Cabot Trail.

A picture says a thousand words and these Nova Scotia images will transport you to an easy-going destination filled with beauty, culture, and, interesting maritime history.

Peggy’s Cove is the most famous tourist destination in all of Nova Scotia. Located just 30 minutes outside of Halifax.

It attracts tourists from around the world who marvel at the rocky landscape of the Atlantic Coast where a lone lighthouse stands guard warning ships of the treacherous waters that lie ahead.

When visiting Peggy’s Cove, the crowds can be brutal. Make sure to stay in a nearby lodge and get up early to have it all to yourself.

A word of caution, stay off the black rocks. People have been swept out to sea by ignoring the warnings. Don’t let that be you!

Lobster and fishing boats move in and out of the harbour in search of lobsters, salmon, and other Atlantic fish as they have done for centuries before.

There are many picturesque fishing villages dotting the Nova Scotia coast line.

Check out our video of our time in Nova Scotia

Buy this photograph of Lunenberg

Lunenburg is a UNESCO World Heritage Site and probably one of the most well-known towns in Nova Scotia.

Famous for its colorful houses, Lunenburg one of the most picturesque cities on the entire East Coast of Canada.

The undefeated racing schooner, The Bluenose calls it home and here you can take a walking tour of Lunenburg hosted by an 8th generation local who will tell you tales passed down from years gone by.

Yarmouth is a city located on the  South West shore of Nova Scotia, and here you’ll find another historic lighthouse standing proud in a striking setting.

The Cape Forchu lighthouse dates back to 1840 and is second only to Peggy’s Cove as Nova Scotia’s most photographed lighthouse.

The Fisheries Museum in Lunenberg is an excellent place to learn about the history and fishing culture of Nova Scotia.

This province was built on fishing and it is still a large part of their heritage.

The three churches of Mahone Bay are a must-stop on the lighthouse route.

It is located directly on the Old Trunk Road 3 between Peggy’s Cove and Lunenburg so while driving you can’t miss it.

The three spires lining the waterfront are a popular spot for photographers.

Located just outside of Lunenburg, Blue Rocks is yet another picturesque fishing village.

Make your way to Blue Rocks at sunrise when the tide is low for the most stunning captures.

Home to the highest tides in the world, the Bay of Fundy is an incredible destination to visit in Nova Scotia.

Walking along the ocean floor when the tide is out is unlike anywhere else on earth.

Tides here have a difference of 30 meters, so when we say the tide is coming in, we mean it!

This picture of Nova Scotia is at Burncoat Head Park, but there is also an incredible photo opportunity to take pictures at the Three Sisters.

Nova Scotia is famous for Astral Photography with a night skies preserve at Kejimkujik National Park.

We didn’t make it to the dark skies preserve, but the noise pollution is light wherever you go in Nova Scotia.

Cape Breton and The Cabot Trail

The Cabot Trail is the most popular place to visit in Nova Scotia and with good reason.

It has incredible coastal views and showcases east coast culture.

Not only does it have wild scenery, it has fishing villages dotting the route.

The Cabot Trail is one of Canada’s greatest road trips.

Sunsets in Nova Scotia are spectacular.

Make sure to take the time to really explore the coast.

Nova Scotia has a gorgeous coastline that constantly changes before your eyes.

It’s the rocky landscape that is the most captivating at sunrise and sunset.

Liverpool was home to the Privateers defending the area in the 18th century.

The Fort Point Lighthouse is a small lighthouse on the route, but it’s worth a visit with an informative video, a picturesque setting and interpretive stations as well as a chance to blow the fog horn!

The best way to explore the coast is by kayak.

There are several places you can rent kayaks along the lighthouse route, including blue rocks, Argyle, and just outside of Peggy’s Cove at Lower Prospect Point.

Don’t miss Crescent Beach, it’s the only beach you can drive on in Nova Scotia and it stretches for 2 km.

Downtown Halifax is growing fast with construction all over town.

The new Halifax Library is a modern piece of architecture winning a Lieutenant Governor’s Design Award in 2014.

The waterfront of Halifax is a beautiful spot for capturing Nova Scotia photography.

It’s a lovely place to watch the sunset and to stroll along the harbourfront.

The Halifax Public Gardens are 16 acres of quiet solitude in the heart of the city.

Guysborough is a little know place in Nova Scotia, but it has all the great adventures that we too throughout the province.

Nova Scotia is fast becoming known for its culinary treats.

With many places promoting farm to table and utilizing local produce, it’s a delicious journey through the province.

Lobster is everywhere in Nova Scotia and locals are always creating new ways to enjoy it.

While fresh out of the pot is preferred by all, there’s lobster mac and cheese and this dish above: Lobster Poutine

The award-winning Fleur de Sel Restaurant in Lunenburg has been voted one of the best places to eat in Canada.

We hope you are enjoying these Nova Scotia pictures of the sensational South Shore.

Click here for a map of our Nova Scotia Pictures.

Our travels to Nova Scotia were in partnership with Nova Scotia Tourism, visit their website for more information travel to the Atlantic Province.