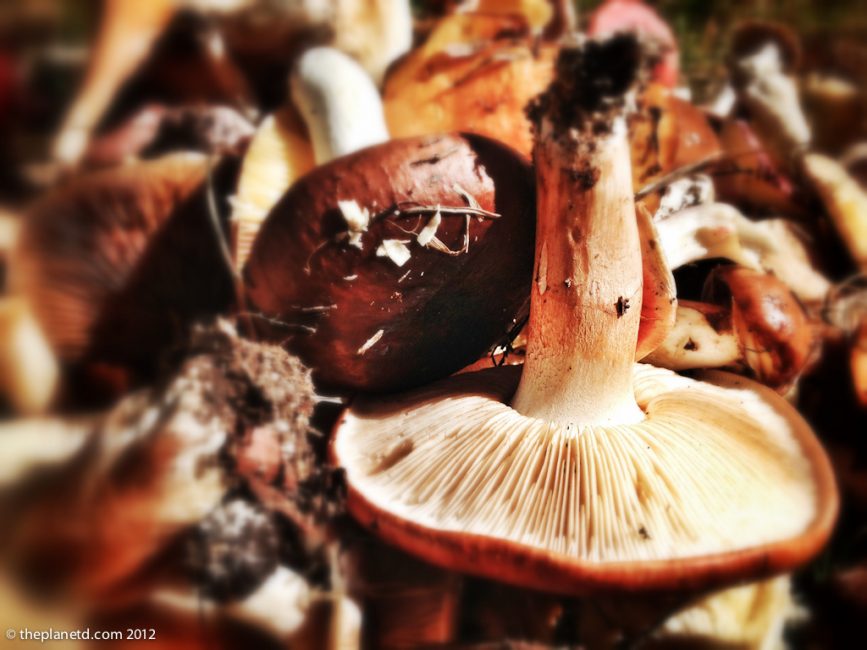 Mushroom hunting in Spain is serious business and we had the chance to give it a try while touring the Pyrenees with Costa Brava Tourism. We met our host, Chef Francesc Rovira of the Michelin Star restaurant Xesc Fonda, early in the day.

His restaurant is located in the small town of Gombrén which lies the Region of Ripollés and it is the perfect location for mushroom hunting. so naturally cooking with mushrooms is one of his specialties. 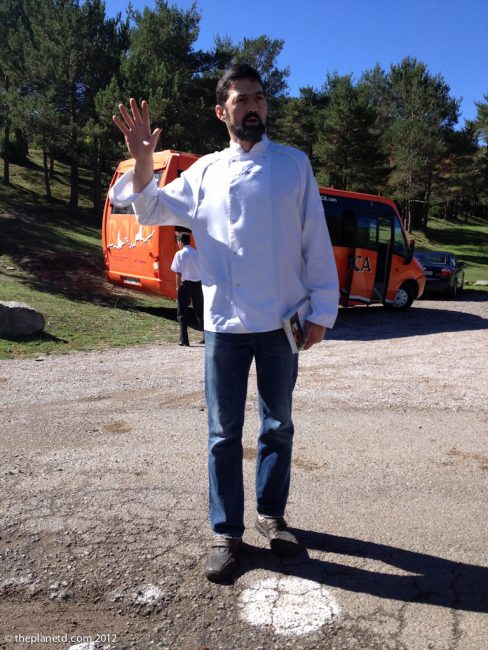 One has to be very careful when hunting for mushrooms in the Pyrenees, there are poisonous ones that are even dangerous to touch!

We were told that there are really only a few mushrooms that are worth finding and eating, so we had to pay attention to our instructions.  We were shown some photographs of what mushrooms to look for and then we were sent off to the hills to be mushroom hunters for a day. 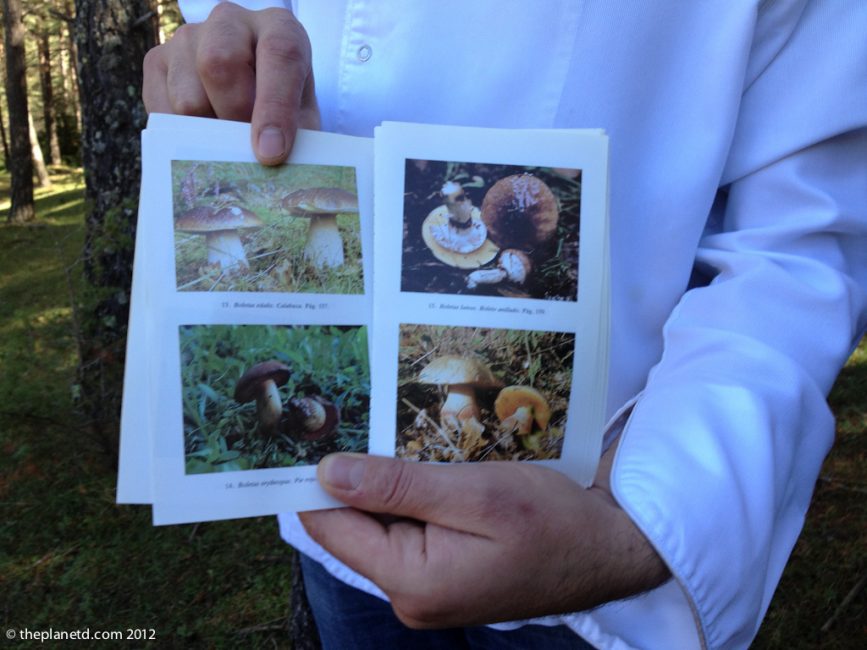 At first I found it difficult to spot anything and wondered if I would even see a mushroom. Dave on the other hand was finding mushrooms nearly every step he took. I heard him say, “Here's one, I found another one, I've hit the motherload over here!”  and that's when I went over to him and said can I have a couple of them? Being the wonderful husband that he is, he let me scoop a few of his mushrooms out of the ground and I felt much better having a couple in my basket. 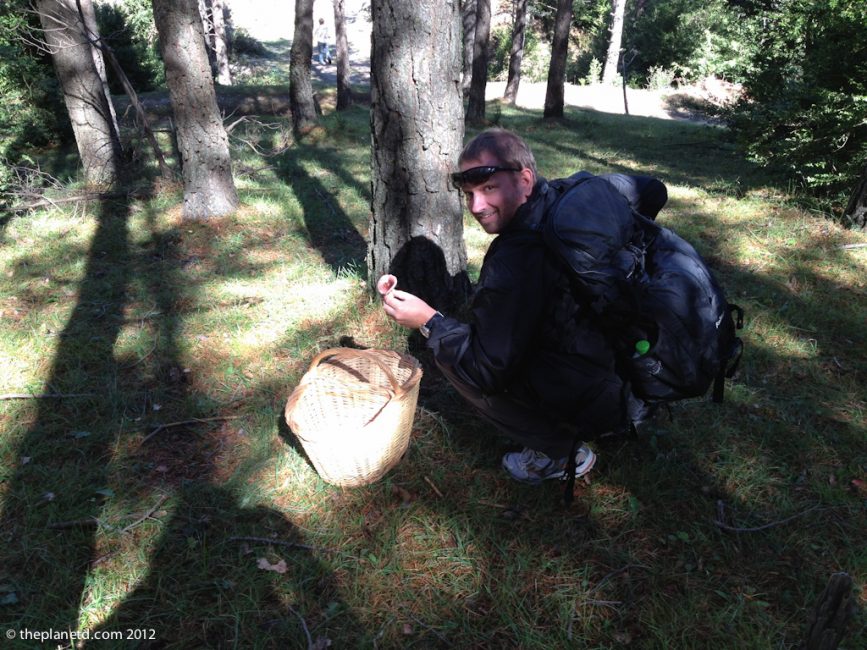 Dave finds a stash of mushrooms

It was now time to get down to business though. I couldn't follow Dave around all day long so I branched out to start looking for myself and soon found a bunch of fungi growing in the dewy grass next to the trees. My basket starting filling up and I was feeling pretty good about myself. I'd yell over to Dave every once in a while to ask how it was going and he was going strong filling his basket as well. We felt like king and queen of the Mushroom Hunters. 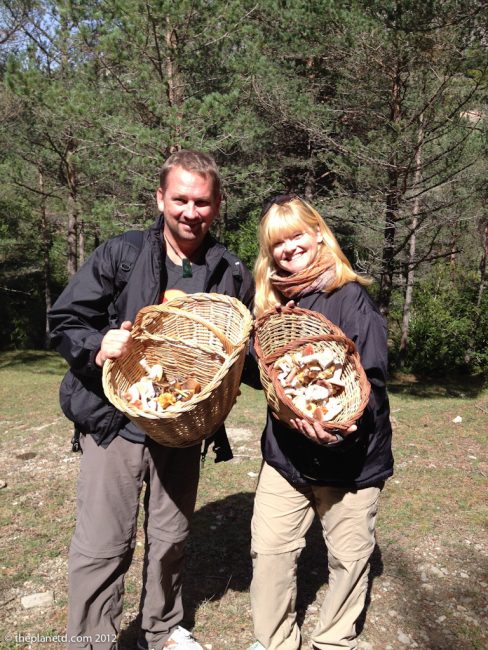 Showing off our stash of mushrooms

That is until Jaume Marin of Costa Brava tourism took a look at our baskets after we eagerly showed him our collection. He furrowed his brow and took pity on us as he said none of our mushrooms were edible. They were simply fungi growing in the woods that no mushroom hunter worth his salt would dare to pick up. 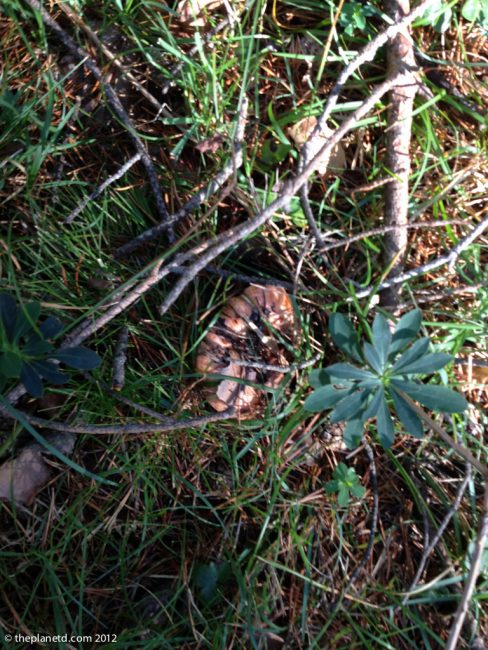 The Pristine Mushroom that Jaume Found

It was exactly at that moment that he spotted a premium mushroom and gasped with excitement. “Now this is a beautiful mushroom,” and he let me dig it out of the ground. I was so nervous that I was going to break it, but I was extremely careful and plucked it out unscathed. Jaume put it in his basket and we continued to search but now in a more selective manner.  After that, I saw mushrooms everywhere. With each new tree, came another batch of mushrooms and I thought that I was gathering premium mushrooms this time around. I had red mushrooms and oddly shaped mushrooms, skinny mushrooms and large mushrooms. I was bound to have a good one in there somewhere. 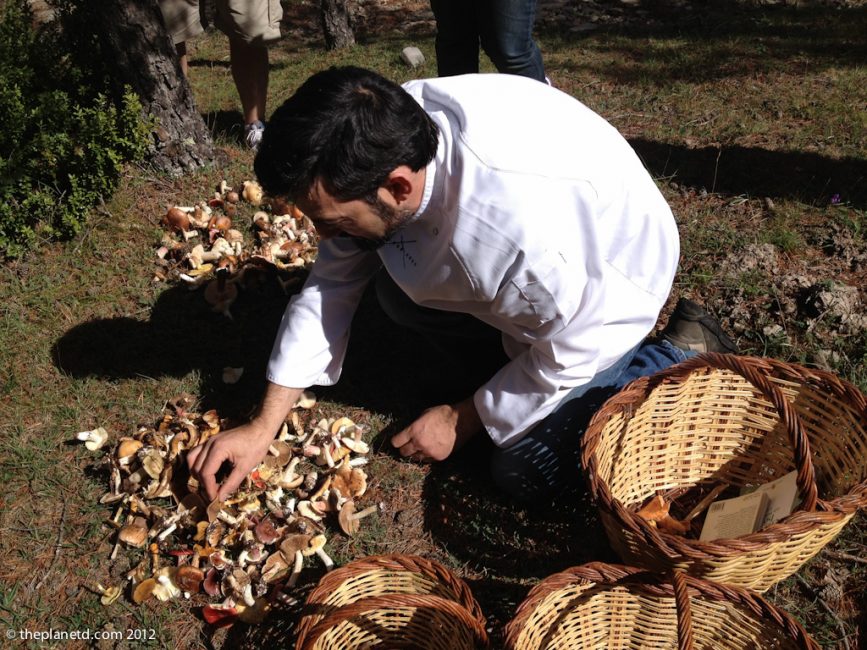 After an hour or so, we all came down the mountain to check out our work. Chef Francesc went through each basket of mushrooms one by one and threw away most of what we found. Dave did well and actually managed to find four useable mushrooms while I fared poorly with nothing until he came to the bottom of my basket and said, “This one's good” I wasn't sure if he just felt sorry for me and just chose any mushroom to say it was good or if it was actually an edible delight. But I'll take it!

Our group of fellow Travel Bloggers managed to find a few premium mushrooms, but not enough for Chef to prepare a proper lunch out of them. Instead, he used his own mushrooms that were waiting at the restaurant. And what a meal of delectable mushrooms we had, but before we ate,  first I had to go to work. 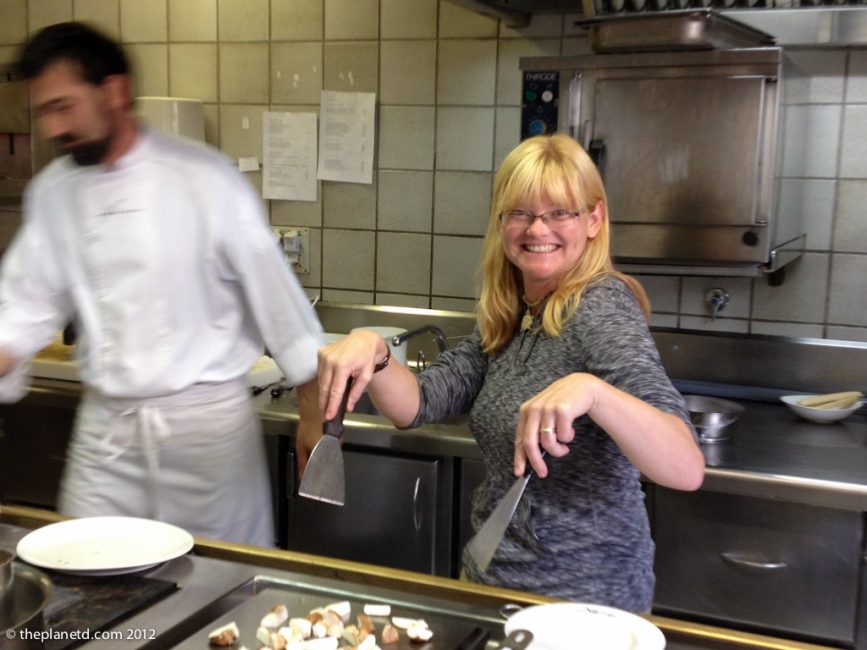 I had the chance to step behind the counter and cook a plate of food with Chef Francesc. What an honour that was! I actually felt nervous and images of Top Chef and Hell's Kitchen ran through my mind as I fumbled over the look of my meal. Chef divided up the ingredients had me plate the dish the way I thought it should look before he'd plate his. It was a little test and I was scared. Dave coached me through it and told me to pile it high. “Height is your friend.” He said, so I took my sauces and meats and piled them high. It turned out pretty well and Chef gave me his seal of approval. Before putting his dish together in about 30 seconds flat and making it far more attractive than mine, But we all agreed, that my garnish was more colourful.

Check out and see how I did in the video below.

Here's a photo comparison of the two plates. I think mine looks a little juvenile and amateur with my over abundance of flowers, but it's colourful and pretty so I'm ok with it. But I think I'll leave the cooking and plating to the true professionals. I'm happy to dig in and eat. 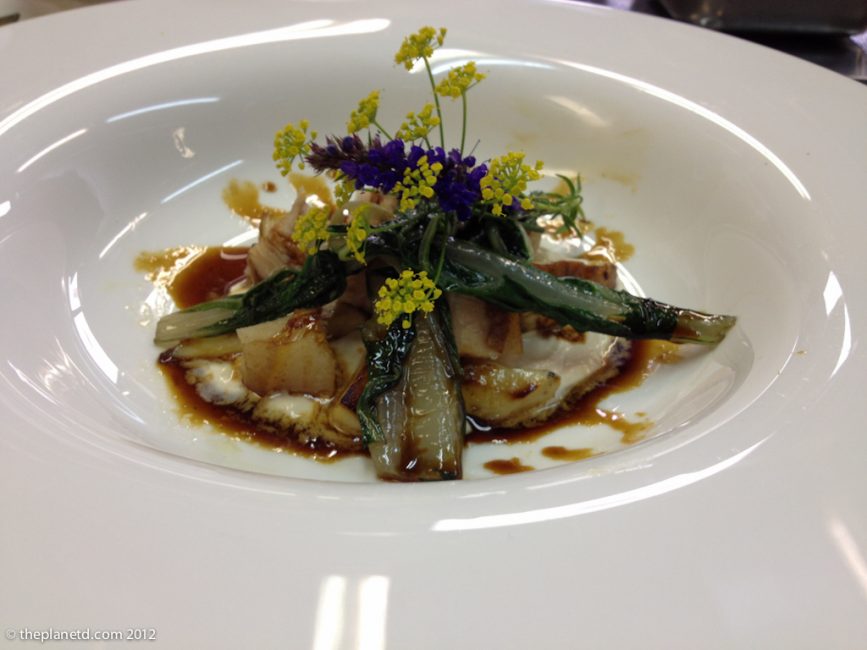 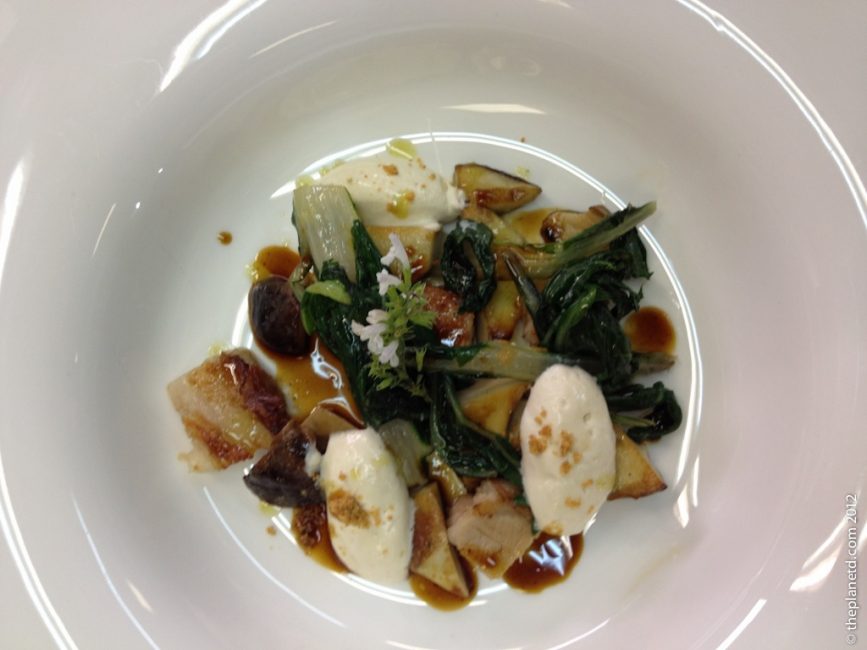 Our mushroom infused meal was incredible and since I am not the most eloquent when it comes to describing flavours and tastes, I will leave you with photos of our dining experience at Xesc Fonda. I can understand why Chef Francesc Rovira was awarded his Michelin Star. Catalunya has some spectacular dining and what is amazing is that you'll find these world class restaurants in the smallest towns. 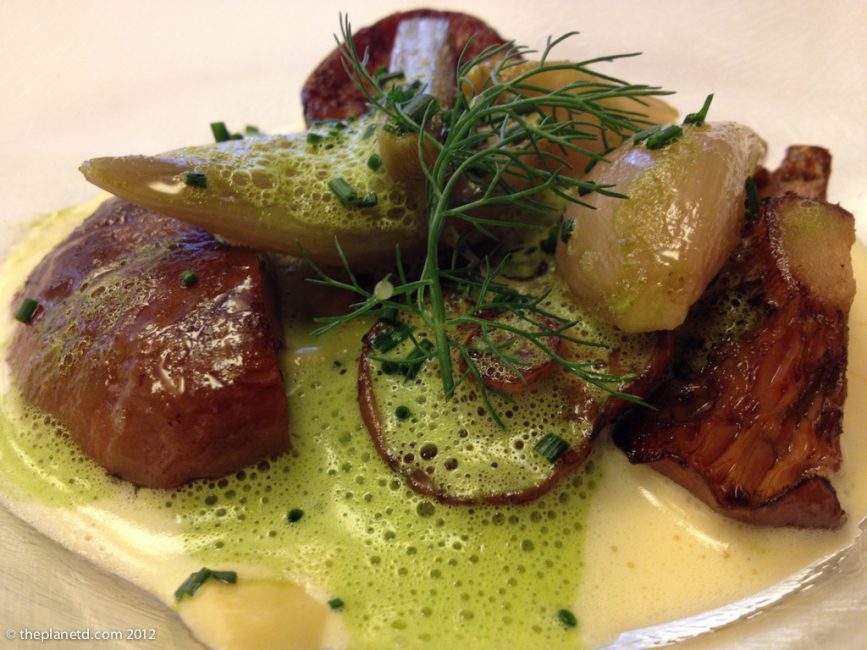 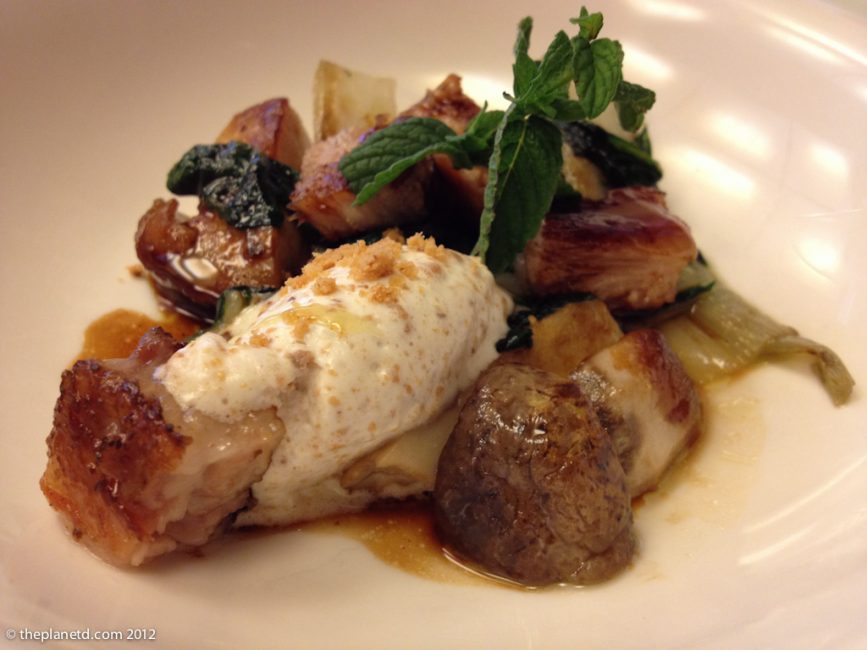 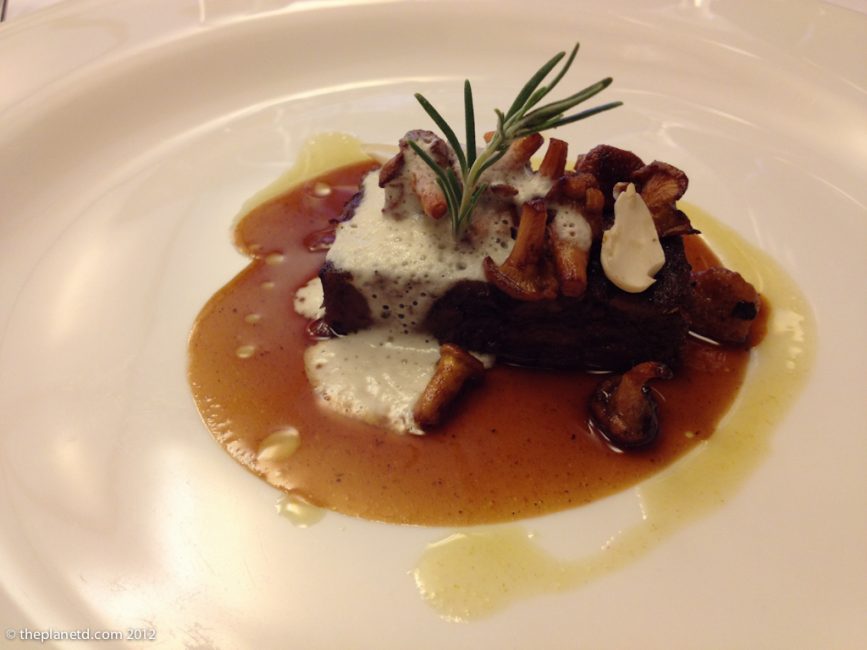 For more In Pyrenees fun, check out.

How the Monk Pulled the Hood Over My Eyes
Pyrenees and Press For ThePlanetD
In the Bell Tower
Wine, Wealth and Fast Cars