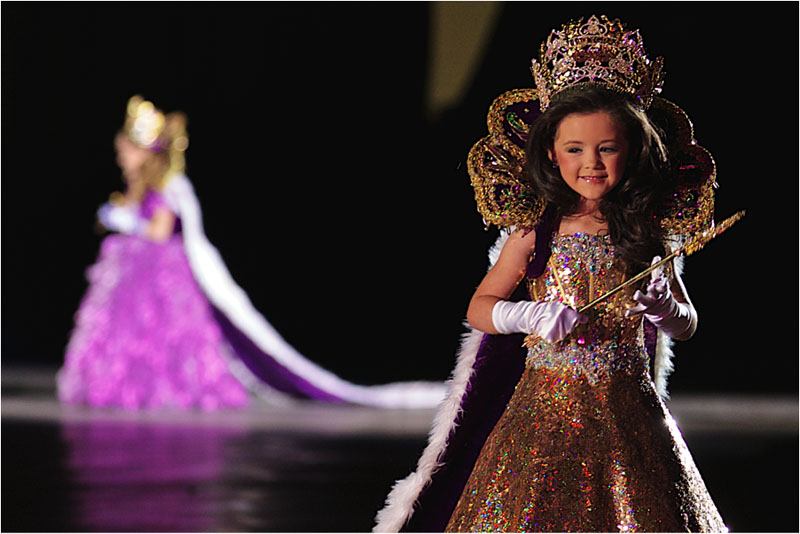 We felt welcome from the moment we set foot in Lake Charles. Greeted at the airport by the lovely Kaylen Fletcher of the Lake Charles Convention and Visitors Bureau, we felt at ease as we were about to experience our first Mardi Gras, and all that great Southwest Louisiana has to offer. 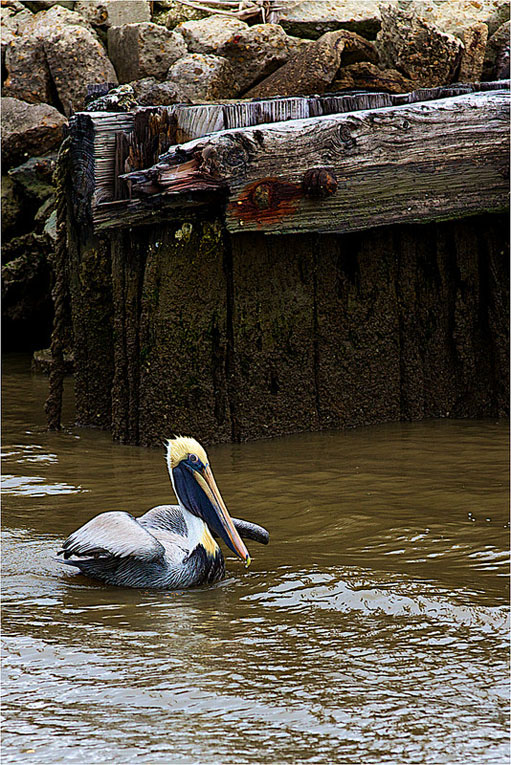 After ferrying across the Calcasieu deep-water Ship Channel on the Cameron Ferry we were greeted on the other side by this Brown Pelican, the official state bird of Louisiana.

These gulls were our guides as we traversed the channel by ferry. It was a nice break to be able to get out of the car after driving along The Creole Trail. The Creole Trail courses through Southwest Louisiana. It’s marshes and water-ways make a great home for many species of birds.

Amos Orr from The Lake Charles CVB was shuttling me around trying to get me close enough to get a snapshot or two of some of the many birds that migrate through Louisiana. Thanks to him I was successful in getting these shots. 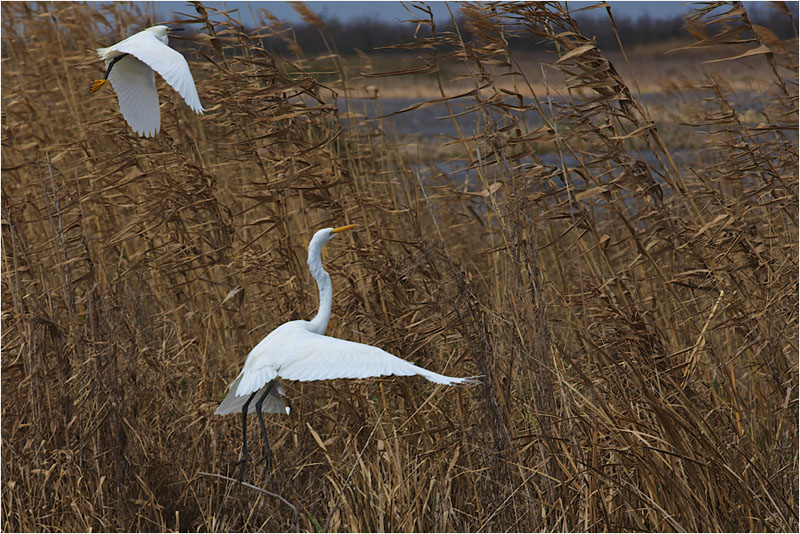 Egrets like these two can be spotted throughout the Creole Trail. For the two hours we travelled the trail I don’t think there was a moment when there wasn’t at least two Egrets within sight the whole way. Their stark white plumage made for a striking contrast against the marshy outback. 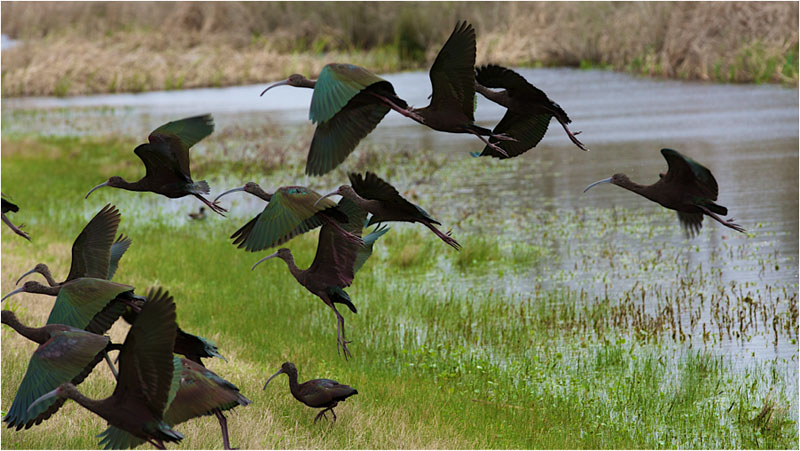 While the Egrets we saw typically were solo or in smaller groups the other birds there were in great flocks. Known as a converging point of many migrating birds The Creole Nature Trail is flush with a great variety of bird photo opportunities. The Glossy Ibis with its awkwardly hooked beak is quite graceful once it finally takes flight.

Normally abundant in these parts we were lucky to have seen just two alligators on this day. Preferring warmer temperatures, the alligators normally would be hiding out in these unseasonably frigid temperatures. This one was more hospitable, welcoming us with his mischievous grin. Smile for the camera!

In Lake Charles, Mardi Gras is for children too! 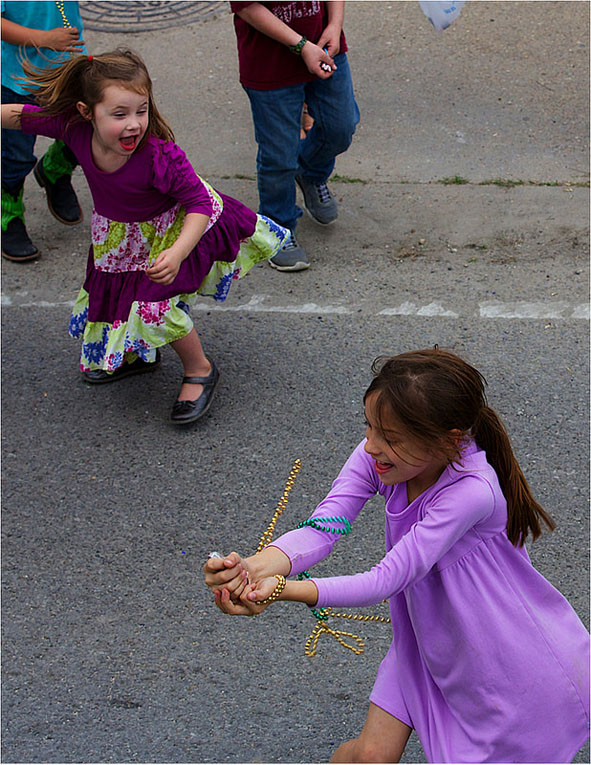 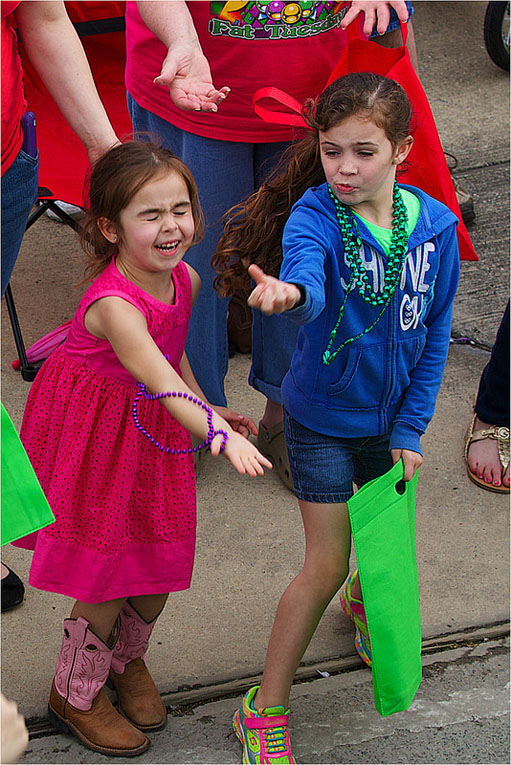 If you thrust your catching arm in the right direction the momentum of the hurled beads seems to find their target all on their own. It’s like the beads want to find their way into an outstretched hand with eyes of their own. Close your eyes and hope for the best! 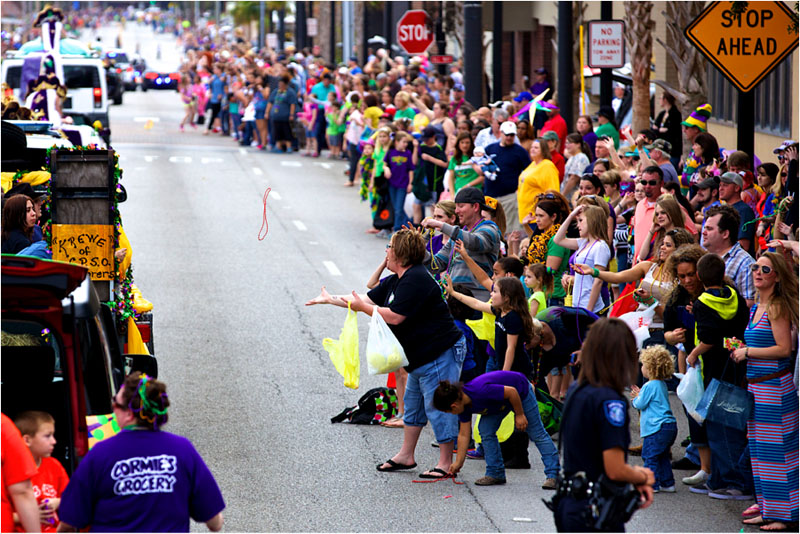 The streets are full of revelers of all ages. The beads can be purchased for pennies but their worth is immeasurable when caught on the ground level of any of the parades held throughout the celebrations.

All eyes are on the Belle of the ball.  There are 7 Queens of Mardi Gras all from different age categories. Once they have shown their crowns and gowns to the audience the royal 7 sit at the head of the runway and oversee the rest of the festivities. 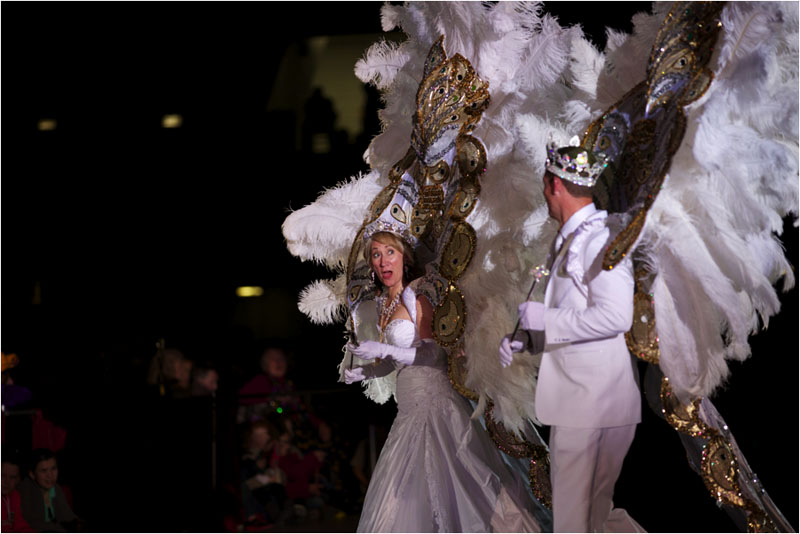 This photo captured a playful moment between the King and Queen from the Krewe du Lac. Amazing costumes like these could be seen throughout the Royal Gala. 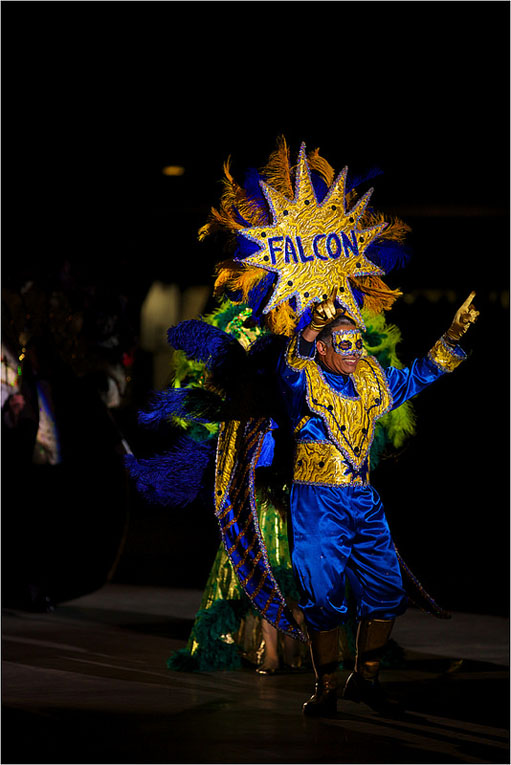 Capturing the fun & playful side of Mardi Gras! Purple, green and yellow, the traditional colors of Mardi Gras are incorporated into many of the Gala costumes.

Many of the homes in Louisiana are built up on stilts in anticipation of storms to come. 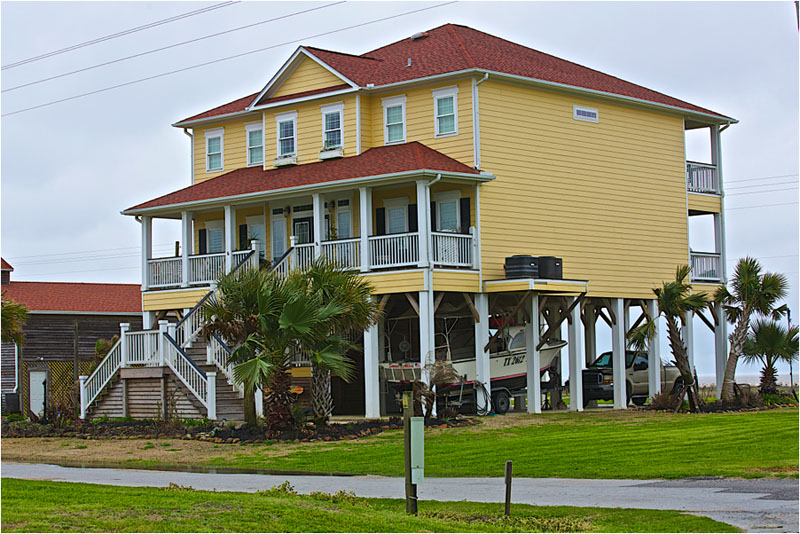 Example of the strength and perseverance of the people of Louisiana. On the plus side there’s lots of parking room for the car and boat.

Holly Beach, also known as the “Cajun Riviera”, is a coastal community in unincorporated community Cameron Parish, Louisiana. This Holly Beach house was built up high to withstand any rising seawater in the future. State law demands that new structures be built 15 feet above sea level. 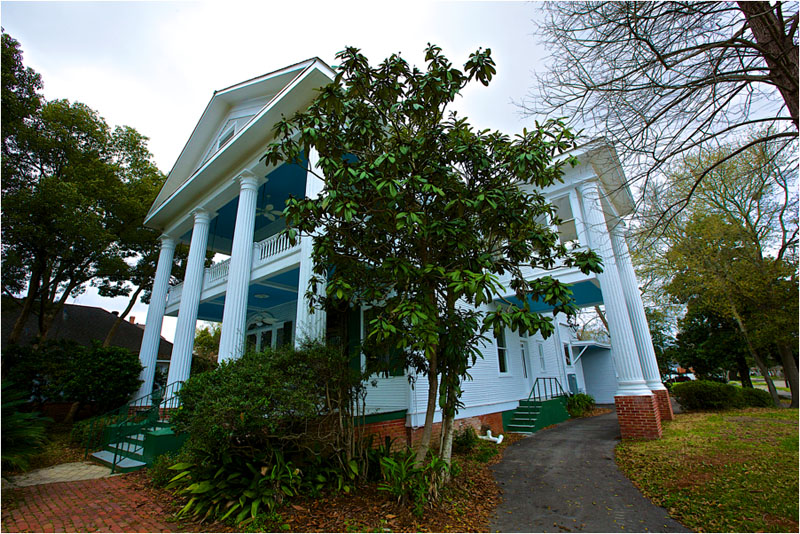 One of the beautiful and grand homes we spotted during our historical carriage ride through the Charpentier Historic District of Lake Charles. Note the blue paint under each awning even the carport.

There were many haunted houses on the Charpentier Historic District Tour, but this overgrown Voodoo house looked quite ominous.

The Mardi Gras Museum of Imperial Calcasieu is home to countless costumes, all of them a work of art. However, while there, we were privy to the makings of another kind of work of art. The traditional King Cake. 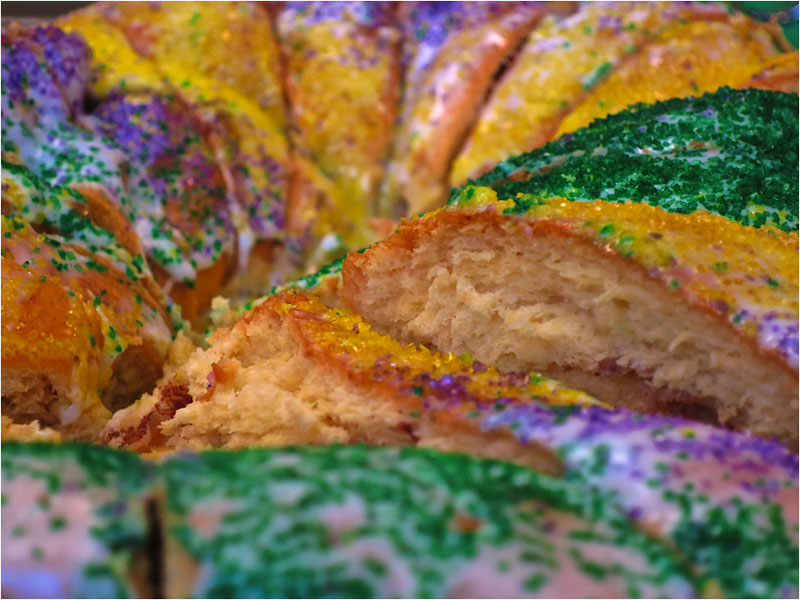 Baked with a tiny plastic baby inside for good luck, this cake is much like an oversized strudel. Irresistible to Bran, King Cake would be on the menu wherever we would go.

Bran’s very first piece of King Cake had this little good-luck charm in it. This little plastic baby turned out to be the perfect good-luck charm. It seems as though our trip to Lake Charles Louisiana was an epic journey of good luck! From riding in a parade float to seeing an alligator this trip was charmed from the moment Bran got the baby in the King Cake!

By Bran Pavlovic and David Hill

Special thanks to Lake Charles of Southwest Louisiana Convention & Visitors Bureau.  For more information on planning your #VisitLakeCharles adventure check them out on:

6 Things to do in Lake Charles

Falling in Love with the Big Easy